(And we’ll cover .sfl files while we’re at it!)

A good friend of mine, Allister, had an interesting question on the MacAdmins Slack:

To wit: What are the .sfl files that are appearing in OS X 10.11 El Capitan? There sure are a lot of them!

Diving into the file format, it was pretty obvious it was a binary plist - and with a little more digging, an NSKeyedArchiver file at that.

Being very familiar with NSKeyedArchiver formats now, it didn’t take a whole lot of effort to come up with a script that allowed me to extract the contents of the com.apple.LSSharedFileList.RecentServers.sfl file.

That is - it didn’t take a lot of effort to extract the initial layer of contents.

At its heart, it’s a dictionary with 3 keys, the most interesting key being items.

The items array is made up of SFLListItem, a new internal object in 10.11, with the following properties:

If you look up Apple’s documentation about BookmarkData, you’ll find details about how to make them, how to open them, and how to get some very basic details from them.

Unfortunately, if you want to just get the share URL that was used to create the BookmarkData in the first place, the only API call Apple offers is this rather unsavory one:

I say “unsavory” because of the implementation details:

“This method fails if the original file or directory could not be located or is on a volume that could not be mounted.

If this method fails, you can use the resourceValuesForKeys:fromBookmarkData: method to obtain information about the bookmark, such as the last known path (NSURLPathKey) to help the user decide how to proceed.”

And yet, if you open up the BookmarkData in a hex editor, it’s obvious the URL information is there in a form it should be directly extractable from. For something like a normal network share, there is absolutely no reason to need to do any sort of resolving to be able to return this data. We should be able to just say “Give me the URL” and it should instantly return the value (instead of failing because the server isn’t visible on the current network).

So what about the aforementioned resourceValuesForKeys:fromBookmarkData: ?

USELESS! The NSURLPathKey for server shares appears to return the mounted volume path (/Volumes/whatever) - not the URL of the server share itself!

… Maybe it’s a resource value in a different key?

But suddenly - more horrible implementation details: You can’t get the list of available keys!

Everywhere you search, everyone just recommends “try all the keys” or “try the keys you want values for”.

… But none of the keys Apple has documented return just the simple share URL. They apparently want you to only use URLByResolvingBookmarkData for that.

To hell with that!

So instead, let’s go exploring with my favorite disassembler 😁

According to Apple’s documentation, NSURL is part of Foundation and sure enough we can find the NSURL.h header file within Foundation.framework. Let’s see what Hopper tells us URLByResolvingBookmarkData is doing:

A quick inspection shows this to be a wrapper around initByResolvingBookmarkData, on with the hunt!

That CF looks like we’re skipping on over to CoreFoundation.framework.

This function isn’t defined here, it’s apparently a “CFCoreServicesInternal” bit of code. Now where could that be defined? …

… Let’s check our good friends over at /System/Library/PrivateFrameworks 😆

Oh my, there appears to be a CoreServicesInternal.framework there! 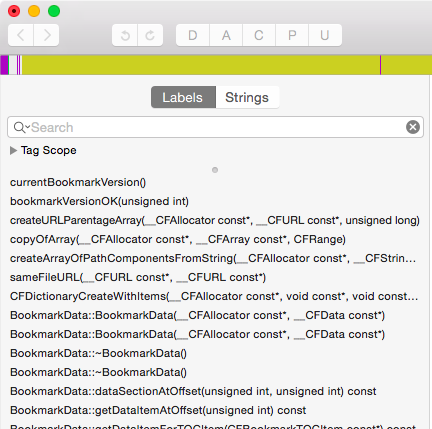 While we’re here, let’s take a glance at all the internal things Apple does with BookmarkData … 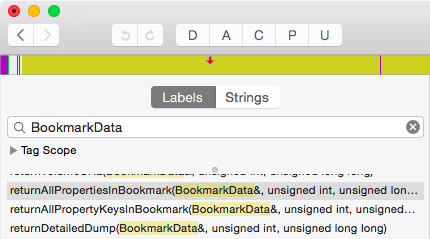 OH HELLLLLLOOoo… what do we have here???

Visiting any one of those functions, I’m extremely curious to see how they get called. So we use Hopper’s helpful “Show Places Calling This Procedure…” and all 3 take us to BookmarkResourcePropertyKeyToInfoStructInit()

Do my eyes deceive me? Are these secret undocumented NSURL resourceValuesForKeys: keys !??!

They sure as hell look like it! Let’s try ‘em out!!

How about we try NSURLBookmarkAllPropertiesKey, first?

(*insert magical handwaving, skipping over the boring part to get to the amazing part*)

Good god. It worked. It’s all there.

All the keys Apple lists - and a ton that they don’t.

… and yet … none of them are what I’m looking for: just the plain URL to the share.

NSURLBookmarkAllPropertyKeysKey turns out to be a bit of a repeat, listing only the keys (but without values).

Want to guess what NSURLBookmarkDetailedDescription does?

It knocked my socks off, that’s what it does.

I’ve clipped bits out here, but it’s a programmer’s debug output for the entire BookmarkData structure, giving all of the offset values within the data and breaking down what’s actually contained in it.

Simply amazing. Everything I could have asked for.

With the information this undocumented debug output provides, I was able to determine the entire structure of the BookmarkData format, which I’ll now document here 😄 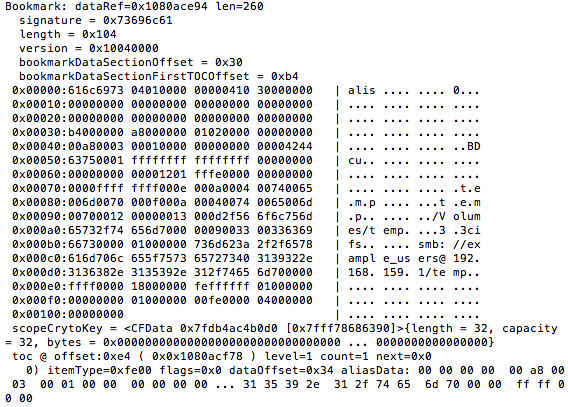 Here we’ll go over this simple 260 byte version of a BookmarkData structure which contains only a single TOC with a single data record. The details I give here were collected after looking at quite a few samples.

(Note: Unless specified otherwise, all integers are unsigned and little endian)

(all examples appeared to be 48 bytes in length)

■ 4 byte string: BookmarkData signature (can be book, the new style, or alis, the original alias record of Mac OS)

The data portion is a combination of several things: TOC (table of contents) records, data records (of various kinds), and most importantly the pointer to the first TOC. The “Offset of BookmarkData data” value points to the beginning of this data structure. 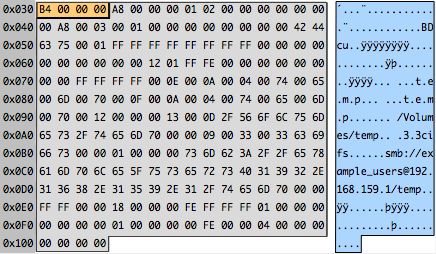 ■ 32-bit integer: Offset of first TOC, measured from the start of the BookmarkData data payload (example: an offset of 100 is actually 148 bytes from the beginning. 48 byte header + 100 bytes from start of data payload)

■ 32-bit integer: Length of TOC data segment after the header

■ 32-bit integer: Number of records in this TOC

(Note: That may actually be a 32-bit integer, followed by 4 null bytes - I would be surprised to see 64-bit offsets here when TOC offsets are 32-bit)

These are the records pointed to by TOCs. They represent the bulk of the contents of BookmarkData and are where the real data is stored. 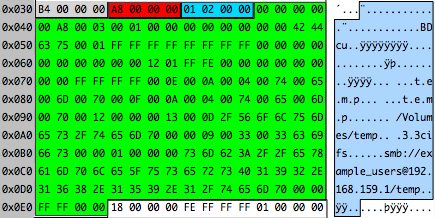 ■ N-bytes: Record data, padded with 0x00 on the end if necessary to reach a multiple of 4 bytes in length

Some of you readers with a keen eye may have recognized the data coloring abilities of Synalyze It! and maybe you’re secretly hoping I’ve written up a formal grammar for BookmarkData using it … sadly I have not 😞. I’m brand new to the software and unfortunately the interface is not very intuitive when it comes to interactively creating a new grammar. I haven’t decided yet whether I’m to blame or poor UI is.

… The even sharper readers which have persisted this far may have noticed that the standard data record in my example doesn’t appear to be something you can easily extract a share URL from. There’s a reason for that!

The newer book variant contains the record types (like 8272 aka “volMountURL”) I mentioned earlier.

If you have records that are book type, I have posted quick and dirty code here that will give you the “volMountURL” information instantly for the .sfl files that started this wild ride.

I’m working on more formal code for BookmarkData parsing as I write this. But now that the information is out there, maybe someone will beat me to the punch 😊

If you have alis-style information, you can can attempt to use code like this:

… But don’t be surprised if you get back results like this if the resource no longer exists:

But worry not, friend readers - I’ve also completely decoded alis records in python, as have others!

And the AFPX mount records they can contain.

And even resource forks!